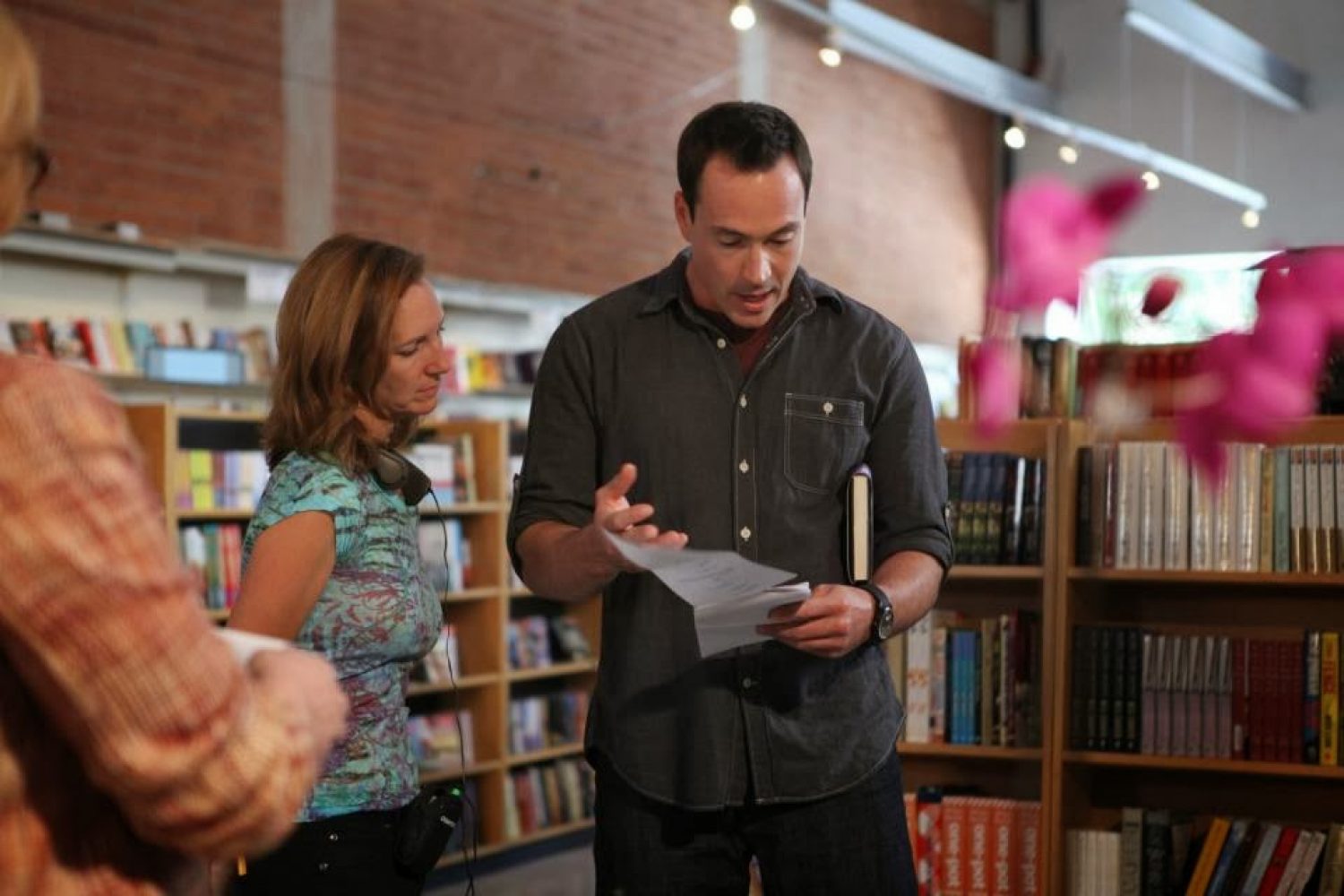 Begrudgingly envying friends and colleagues as they began to garner the success you have so longingly yearned for is a difficult emotion for many people to admit to feeling. However, that sentiment of defeat and overcoming a series of setbacks is amusingly and satirically emphasized in director Ellie Kanner’s new comedy, ‘Authors Anonymous,’ as the flawed ensemble of characters struggle to find their own happiness and contentment. Led by the versatile and dynamic pairing of actors Chris Klein and Kaley Cuoco, the film shows that while people’s resentment can be amusing on certain levels, that continued unwarranted jealously can also cause emotional pain between friends who otherwise had a strong connection.

‘Authors Anonymous’ follows a group of aspiring Los Angeles novelists who are filming a documentary about their weekly support group, as they’re all eagerly waiting to be published. The group is led by Alan Mooney (Dylan Walsh), an eye doctor who longs to also be a writer, but is unable to successfully translate them into enticing stories. His wife, Colette (Teri Polo), is an aspiring romance novelist who releases her marital and sexual frustrations through erotic fiction. Alan is intimidated by his wife’s attraction to the young William Bruce (Jonathan Bennett), who adores Charles Bukowski but can’t write any of his own original material.

Meanwhile Henry Obert (Klein) holds a vast literary knowledge, but finds himself delivering pizza and cleaning carpets to make extra money as he strives to find the right literary deal. He longs to have a romantic relationship with the ditsy Hannah Rinaldi (Cuoco), who becomes frustrated their current relationship isn’t enough for him. Also feeling deceived after he discovers she doesn’t follow her own compassionately trite advice. Henry and his fellow writers become jealous when she’s the first group member to secure an agent and sign a publishing deal. Her eminent success also pushes the Tom Clancy-obsessed veteran, John K. Butzin (Dennis Farina), to rush off to become the group’s next success story.

Klein generously took the time recently to talk about filming ‘Authors Anonymous,’ which is now available On Demand and on iTunes, over the phone. Among other things, the actor discussed how he was drawn to appearing in the comedy in part because of the chance to collaborate with both his talented co-stars and Kanner, and how he felt they were all well-suited for their work on the film; how starring in independent movies, as opposed to studio films, doesn’t change his approach to acting, and how he feels making indies is all about freedom of expression; and how he’s a fan of Christopher Guest’s comedies, and the documentary aspect of ‘Authors Anonymous’ is a bit synonymous with the tone of the actor-writer-director-producer’s films.

Question (Q): You star as Henry Obert in the new comedy, ‘Authors Anonymous.’ What was it about the character and the script overall that convinced you to take on the role?

Chris Klein (CK): In ‘Author’s Anonymous,’ I play Henry Obert, who is an aspiring novelist. He’s a member of a support group of friends and fellow aspiring novelists. Henry’s a shy, introverted guy, and a genuinely good soul. He really loves being a part of the support group, and the friendships it brings.

What really attracted me to this character and movie initially were the other actors. I was the last piece of the puzzle that joined this cast. It’s a great cast, starting with Kaley Cuoco, who’s a brilliant actress and is very funny. She’s just right for her role of Hannah in the movie. I’ve been a fan of Dennis Farina for a long time, God rest his soul. He was a Chicago guy, and being a child and growing up there myself, I was a fan of his acting.

Dylan Walsh is wonderful in the picture, and I think Teri Polo stole the movie. All these terrific actors were already part of the movie. Also, to work with Ellie (Kanner), the director, who has such a beautiful touch on the stories she tells, was really exciting.

Q: Speaking of Ellie, she has experience in the romantic comedy genre, having helmed such films as ‘Wake’ and ‘Crazylove.’ What was your overall experience of working with her on the set, since she is so familiar with the genre?

CK: Working with Ellie was fantastic. She’s a wonderful director, and had a really great handle on the material. She was the woman for the job, no doubt. I think when people see this movie, they’ll really enjoy it for the soft, intricate touch that she brought to the comedy.

Another thing about this picture is that Ellie did a great job of allowing the actors to bring what they wanted to the characters. She allowed freedom of expression, in terms of the character and the script. There wasn’t a lot of improv, but she allowed us our own ideas to the picture, which I think adds a lot to it.

Q: Speaking of improvising, did you offer Ellie any suggestions on your ideas on building a backstory and motivations for Henry while shooting?

CK: Well, I had as much input as I wanted to bring. I brought some very specific ideas to what I thought the character was. All of those conversations were done before I took the part. In our creative discussions about who this character was, Ellie and I came to the conclusion that I was the right guy to play him. We also figured out that my ideas were going to fit along nicely with Ellie’s ideas, and married our two ideas together. Then the rest is about servicing the film, its script and Ellie’s vision. At the end of the day, that’s the most important thing.