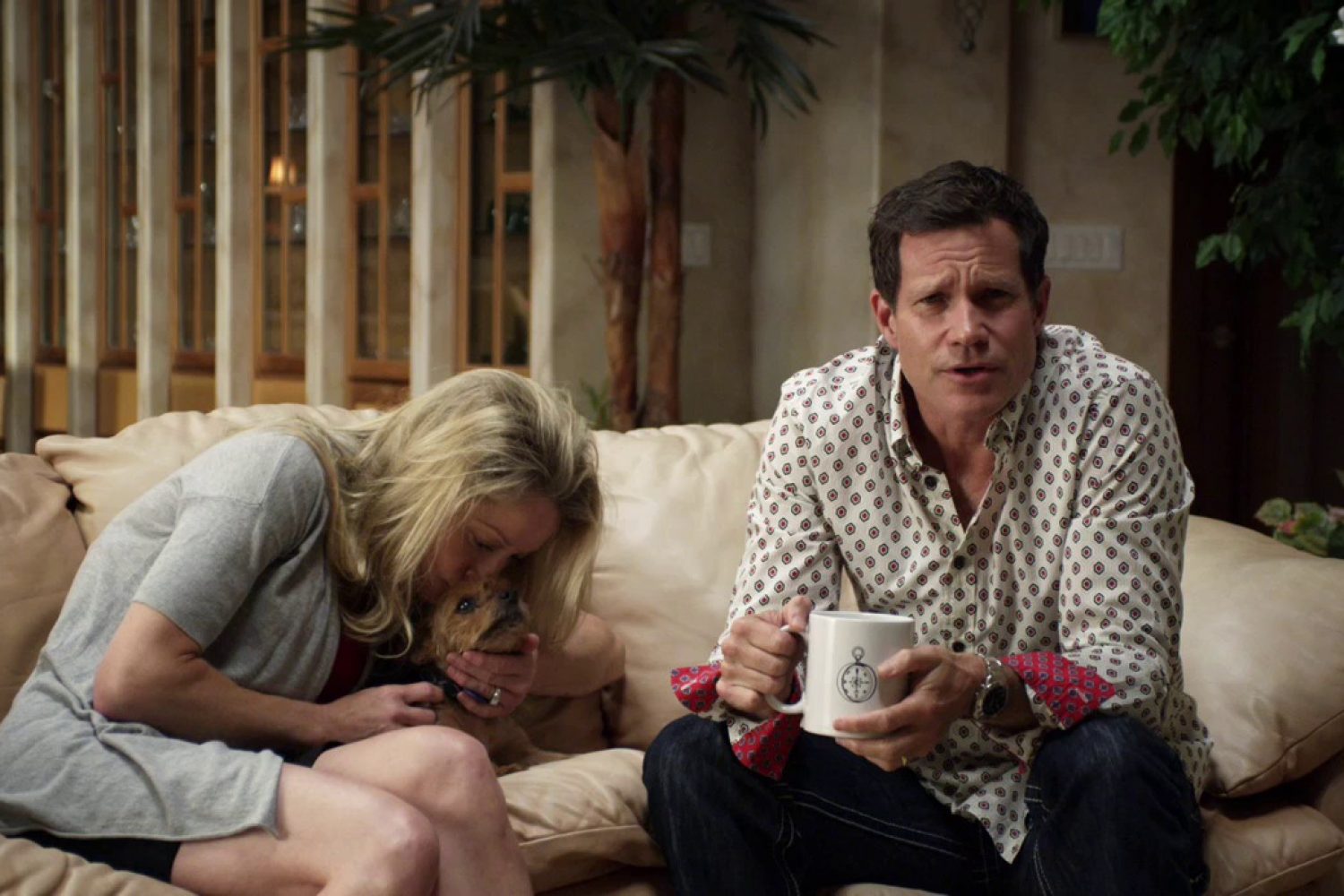 Five amateur writers: A Real Housewife of her very successful Optometrist (Teri Polo & Dylan Walsh), a “poser” (Jonathan Bennett), a Vietnam vet (Dennis Farina, in his final role), a prolific, but unpublished writer (AMERICAN PIE’s Chris Klein), and one clueless, very pretty writer (“The Big Bang Theory’s” Kaley Cuoco). Five very different personalities, as different as the Five Elements of Wu Xing (look it up, kiddies), with a singular goal in mind – a novel that will propel each and every one into instant stardom. While they all struggled, and crashed, and burned, they at least tried to be supportive and coaching. but when one finally pulls away with her success…. (spoiler)

AUTHORS ANONYMOUS, a film-in-a-film mockumentary from the minds of writer David Congalton and helmed by Ellie Kanner, is a trainwreck, like most mockumentaries, but the biggest difference with this one is that you don’t hate these people, don’t want to laugh at them. Like most Hollywood wannabes, these are sad, desperate, delusional people, waiting for that brass ring to be presented to them. You feel sorry for them, but this is the universe they’ve created for themselves. Colette Mooney (Polo), just wants to be better than the rest of her writer’s group, and Alan (Walsh) has the money to give her whatever he wants. William Bruce (Bennett) came to LA to be a success, but doesn’t want to do the work. John K. Butzin (Farina) fancies himself the next John Clancy. Henry Obert (Klein) is a dedicated writer, but is distracted by his writer idols, and more immediately by Hannah Rinaldi (Cuoco), who cannot name a single writer, and struggles with common concepts, such as “metaphor.” Guess which one gets her big break? Immediately after she announces that she was approached by an agent, the group begins to deconstruct. Irritation turns to resentment, resentment turns to jealousy, jealousy turn to anger, anger turns to hate, and they all turn to the Dark Side (sorry, wrong genre – but I digress)

Each character is a unique and separate story, and it is in their performances that this reviewer watched to see where it was going to end. Cuoco and Klein do the “boy-meets-girl-boy-loses-girl” device, and it ends logically. The others just self-destruct, but Farina’s performance is probably the saddest. Desperate to be a published writer, he falls for scam after scam. Tough but very vulnerable, he puts on a performance that is worthy of a swan song. Many actors leave this mortal plane on a sour note; Peter Seller’s powerhouse performance in BEING THERE was soured by his final film, The FIENDISH PLOT OF FU MANCHU. It was fortunate that Farina’s estate can be proud of his final performance. But no vehicle film is AUTHORS ANONYMOUS. Five characters, five stories, five performances, yet it is nothing short of an ensemble piece, worthy of being ranked with The BIG CHILL or DEATH at a FUNERAL. When they were together, this reviewer felt the chemistry as they fed off each other’s energies. It was a film that you can’t turn away from, because you felt for each character, even when they melted down.

On my personal rating scale of with “5” being drop everything and see the video now; if you’re female, bear the producers’ children and “0” being burn down the theater, murder the staff, and violate their dog, this movie earns a “4.5,” using my Patented Bell Curve for Independent films. AUTHORS ANONYMOUS is not a comedy, even though it is cast by comic actors. It does have its funny moments, but you stay for the story.

The film is rated PG-13 for some suggestive material; but this is not a date movie. It is a grown-up film about grown-ups with grown-up issues – that have childish fantasies of fortune and glory. Mind you, there are resolutions, some happy, some sad, some outrageous, and somehow, it makes sense for these characters. This reviewer enjoyed the film, but needed to put on his Big Boy Pants.